Should I turn off my computer at the end of the day or leave it on? 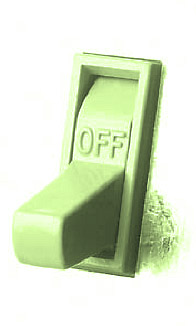 1) A computer that is switched on is a fire hazard

I have never heard of a computer catching fire, so I did some Googling. There were suprisingly few results (about 30,000) to the phrase “computer caught fire” and almost all of them seemed to refer to “enthusiasts” making their own machines, overclocking, and so forth. I found nothing to suggest that I should worry more about a professionally-built computer than I should worry about, say, leaving my fridge or TV switched on.

2) It takes more electricity to switch off and on than to leave it on. A variation of this is that it wears out the components faster if you switch the machine on and off as compared with leaving it on

These seem to be a type of “cyber myth”. I can find no evidence at all one way or the other.

3) Switching the computer off at night makes it run faster

This is true up to a point (with Windows computers, anyway) but not as much as it used to be. However, it’s not the good night’s sleep that’s done it good, but the re-boot (which has flushed the memory out). Windows computers used to run slower and slower the longer they were left switched on as more and more of the memory was allocated to programs and not then released when the program was closed. I seem to remember that in the days of Windows 3 it would have been unheard of to leave a computer on for days on end. It would just grind to a halt. These days this is hardly an issue – if at all. Windows and the programs using it are much better written and there’s much more memory available.

Undoubtedly. I suspect that computers take as long to boot up now as they did 25 years ago. However, “standby” (sleep mode) is almost as quick to re-start as leaving it fully awake and alert.

True, but a computer that is asleep (ie in standby mode) can be woken automatically to perform scheduled tasks and then be put back into standby.

Can’t argue with that. If, for instance, you use a program like TeamViewer to access a machine remotely then that machine has to be switched on!

This is being perceived as more and more important, but it’s nowhere near as clear-cut as you might expect. I tested the power consumption of two of my laptops and my (oldish) Compaq desktop under different conditions. These results are not scientific and the short test time (about one hour for each condition) means that they should be taken as nothing more than a guide. In the laptop tests, the laptop’s own battery was connected and fully charged. In all cases, only Windows plus security programs (firewall, antivirus) were running. Just out of interest, I also tested the consumption of my TV (a Sony Bravia LCD of reasonably modest screen size). The results were as follows:

From these results, one thing is very clear. From the point of view of power consumption, there is no point at all in switching off a computer if you leave it connected to the power supply. The power usage is almost exactly the same as leaving it in standby (sleep) mode.

Is it worth switching it off?

It’s almost impossible to apply an average cost of electricity to this analysis as it depends on the company, the tarriff, the price at the margin of use etc. It seems that a kwh (kilowatt hour) of electricity can be anything from 4p to 20p. As guide, though, the next table shows the total kwh that a machine would consume over a complete year. If you know how much your electricity is costing per unit then applying that figure to the annual consumption will give an idea of the potential savings (but remember that your computer may be in use for, say, 25% of the time so savings during that time would not be so high).

My own rule of thumb is that I leave machines in sleep mode (standby) if I’m expecting to use them in the next 24 hours and switch them off otherwise.

Memo to self: unplug it if switching it off. Switching it off and leaving it plugged in is pointless. It’s a much better compromise to leave it in sleep mode.

See all the blog posts in a category

This is an necessary category.

This is an non-necessary category.