In the past, Internet Explorer updates were offered to the user as part of the Windows update process, but the user had to “co-operate” with the process and confirm that (s)he wished to install the new version. We all know that software updates seem like a nuisance and an interruption to whatever we are doing. It is always very tempting to click the “cancel” button and carry on as before.

The main reason why this is not such a good idea with new versions of Internet Explorer is that a large proportion of the unpleasant malware and suchlike that gets onto our computers does so by slipping past the browser and into our systems. Older versions of Internet Explorer (or, indeed, any other browser) are inherently less secure than new ones. It makes sense to update to new versions if you don’t have a compelling reason not to.

But apart from the inconvenience of stopping what we are doing so that the new version can be installed, we may also be irritated by the fact that the new version doesn’t look or behave the same as the old one. For instance, the trend in recent versions of most web browsers (including Internet Explorer) has been to go for a more “minimalist” look. This means that there is more room on the screen to display the web page we are looking at, but it’s irritating to realise that the “home” button or the “bookmarks” button has disappeared or moved somewhere new.

And when it comes to upgrading to Internet Windows Explorer 9, other irritations include:

The “download” dialog box that used to appear in the middle of the screen to confirm that we definitely do want to download the file we’ve just asked for, has moved to the bottom of the screen and became much less obvious. It now looks like this:

I wonder how many minutes I’ve wasted staring semi-vacantly at the screen waiting for that dialog box to appear, only to realise eventually that it’s at the bottom and not directly in front of my eyes (Note to my computer support clients: I’ve never ever done this on your time. I only ever waste time when I’m in front of my own computer).

Another thing that is really annoying lots of Internet Explorer 9 users is the box that often pops up at the bottom of the screen that looks like this:

What’s happening here is that Internet Explorer has noticed that one or more “add-ons” (ie bells and whistles) that you have bolted on to your Internet Explorer is slowing down the opening up of your browser. Not wanting to get the blame itself for slow opening, Internet Explorer times the opening of these add-ons and pops up the box when one of them exceeds a threshold for the time it takes to load. If you click on the button on this popup bar marked “Choose add-ons” you can see which ones are slow to load. In the example below, it is the Samsung AnyWeb Print that is causing the popup because it is taking longer to load than the threshold of 0.20 seconds 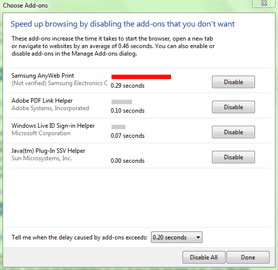 What’s annoying everyone is that there’s no way of turning off this “feature”. The only way of stopping the popup from happening is to either disable the guilty add-on (in this case the Samsung AnyWeb Print) or increase the threshold so high that it never gets triggered. You can change the threshold by clicking on the button that currently says “0.20 seconds”. There isn’t any way to tell Internet Explorer to just mind its own business and stop telling tales on the slow add-ons. No doubt this feature was introduced as an answer to critics who said that Internet Explorer was loading slowly, but you’d think it perfectly reasonable to be able to turn this “feature” off entirely.

Anyway, the point I was going to make – before “Mr Grumpy” took over – is that Microsoft are now changing to a system whereby Internet Explorer is going to be invisbly and automatically updated as part of the regular Windows Updates process. This means that we are going to just find that Internet Explorer looks and feels different without warning.

If you don’t want this to happen, there are “toolkits” to stop updating from becoming automatic and Microsoft say that they will be building the automatic upgrading option into the settings of the browser itself at some time in the future. See The Windows Blog for further information.

So, at any time soon (unless you install a toolkit) you may find that your Internet Explorer has been updated to version 9 without your explicit approval. My own recommendation, though, is to accept this change without thinking of blocking it. The irritations of the popups are nowhere near as serious as the possible damage that could be wreaked by something nasty getting past your older version of Internet Explorer. And looking at it from a wider perspective, if this move means that more people are better protected then that’s bad news for the malware peddlars and good news for the rest of us.

And if you don’t like it, you can always switch to Chrome or Firefox, or another browser….. See my earlier blog on browsers for more information.

See all the blog posts in a category

This is an necessary category.

This is an non-necessary category.